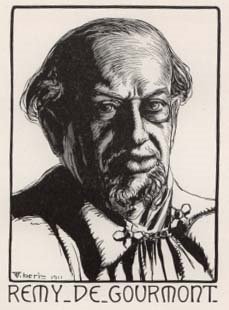 Welcome; we're up and waddling.

I feel I should enjoy the French Decadent writers more than I do. What a fucking chore so many are to read: long lists, dusty discursions, over-striving authorial voices. The usual tone is righteous hauteur, lightened with tumbling purple passages meant as catharsis or transcendence. Even Huysmans, livelier than most, is unmistakeably laborious reading-- not what one hopes for from a genre so concerned with leisure and pleasure.

It may be apples and oranges, but I'm struck by the contrast between the posture-over-prose priorities of the French decadents and, for random example, C.P. Snow's The Masters, a brilliantly thrilling book about a brilliantly unthrilling topic. Stultified Cambridge academics jockeying for political leverage within their insular college department... sounds soporific, but what a page-turner it was!

There is a craft to writing, as there is to plumbing, as there is to most activities we humans waste our time on. There is a craft to writing that I would argue can be almost entirely separated from content, a craft which will shine nearly independent of form. We can find pleasures in the homespun, in the aggressively stylized or in the kitschily bad, but when we return to something as accessible and enjoyable as Portrait of the Artist, there is no mistaking the sheer technical excellence by which Joyce achieves his intended effects.

Of course there are considerations of translation and expectation; there are contexts literary, cultural and otherwise that shape a book's writing, but I submit there is such a thing as good writing, by which I mean effective writing, by which I mean writing which does whatever task its author sets it. When I judge a book, I judge both my experience of the book and whether I feel the book successful at its aims.

By those measures, writing which makes me want to go read something else is unlikely to be good writing. It is the literary equivalent of what professional wrestling calls "go-away heat."

supremacy
This entry was posted in Posted here. Bookmark the permalink.