In Print, Death of Print, Printing

Having survived another Mardi Gras, I'm renouncing Twitter for Lent, and my intention is to post more often here. To begin with, I've been remiss in posting links to some of my recent writing in Antigravity Magazine. 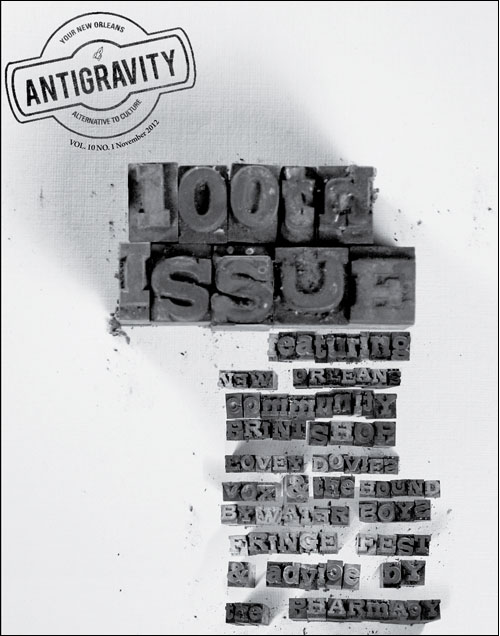 In the February 2013 issue, I profiled the couple who run Creeping Hemlock Press, a successful independent publisher here in New Orleans.

Interviews are fun for a couple reasons. I get paid without having to write nearly as much, and I also love hearing about a subject or field-- almost anything-- from people who've spent a lot of time studying or working in it. Among the material cut from the interview (by yours truly, not by an angry editor) were hundreds of words of RJ & Julia analyzing the history, present & future of the paperback industry.

With so much already in the piece, I had to let the publishing-industry stuff go in favor of subjects that grab a broader audience, but I learned a great deal from the conversation. I accept-- grudgingly, unhappily-- that making a living as a writer increasingly involves online texts and "downloads." I don't much mourn the death of Big Publishing, but to me, the words book and novel will always connote a real, physical, bound & printed-on-paper object.

Speaking of which, I also wrote about the re-opening of the New Orleans Community Print Shop, the cover story of Antigravity's 100th issue. The article shocked a few people... a few dickheads, really. People who deserved it.

A couple months after writing the piece, I availed myself of the Print Shop (or "Printshop") facilities for the first time; I went there to print up some custom handkerchiefs as favors for a Carnival Walking Krewe. It was a messy and frustrating process, like most first times at most things, but the results were thrilling. I'm happy to have the Print Shop open and nearby me!